JASNA Greater Phoenix is a unique group of people, friends, who enjoy reading and discussing the works of Jane Austen. We also enjoy learning about and experiencing and some of the “past-times” Jane may have enjoyed. We are one of over 70 regional groups across the United States and Canada.

Members at a local JASNA meeting may discuss an Austen novel, hear a lecture about Austen or the Regency era, or enjoy a tea or Box Hill picnic. We celebrate Jane Austen’s birthday with a luncheon, tea, or special event. Other activities may include museum and garden tours, English country dancing, and Regency fashion shows. We also host special events such as scholarly conferences and galas which are open to the public.

January 2021 marked the beginning of our 10th year as a region. You are cordially invited to attend any of our events. Visitors are always welcome!

We are delighted to announce the election of our new Regional Coordinator Emily Smith.

JASNA Greater Phoenix members, please check your email and respond to the survey about what direction you would like for our group. All volunteers are welcome! 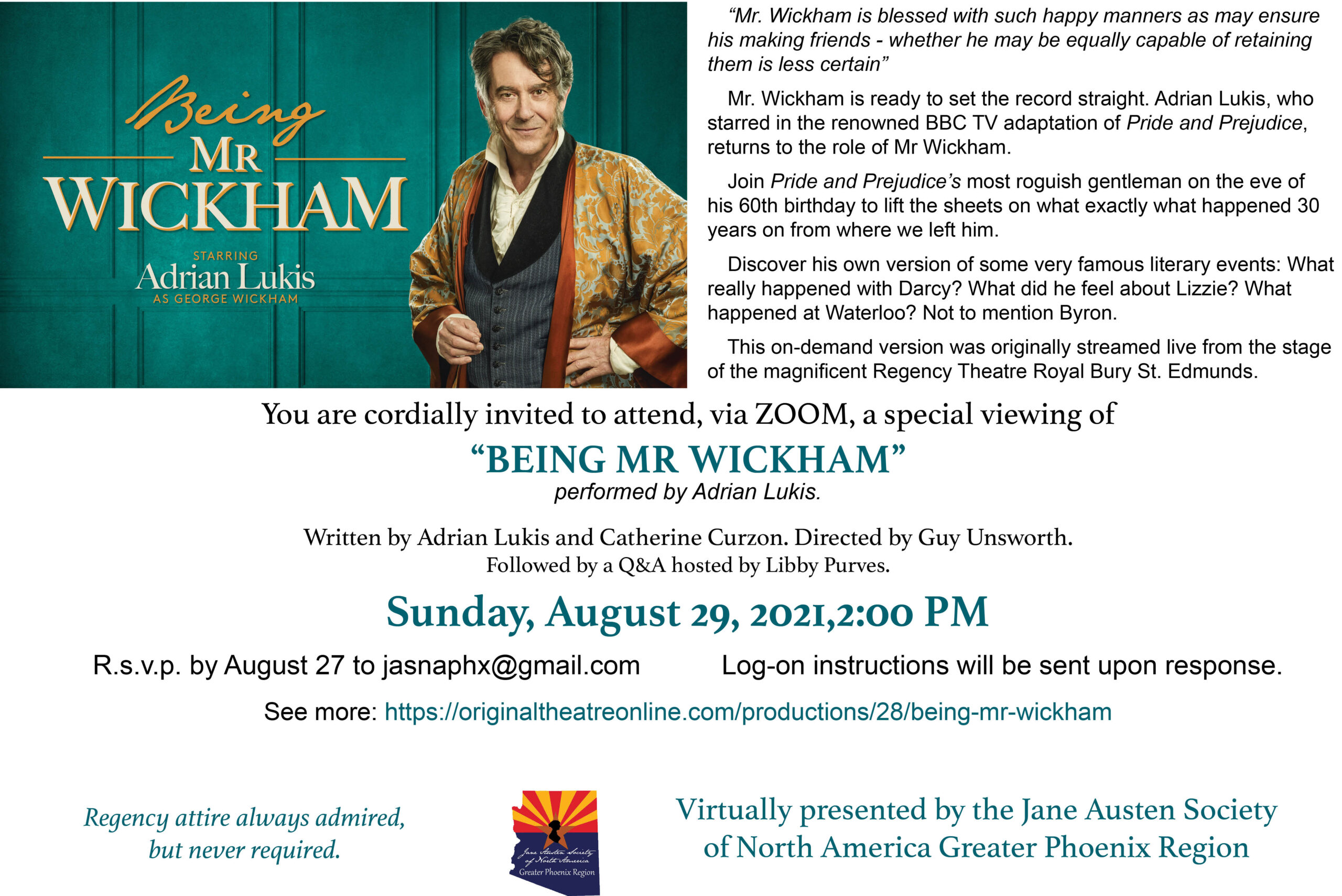 You are cordially invited to attend,

via ZOOM, a special viewing of

Followed by a Q&A hosted by Libby Purves.

Log-on instructions will be sent upon response.

“Mr. Wickham is blessed with such happy manners as may ensure his making friends – whether he may be equally capable of retaining them is less certain”

Mr. Wickham is ready to set the record straight. Adrian Lukis, who starred in the renowned BBC TV adaptation of Pride and Prejudice, returns to the role of Mr Wickham.

Join Pride and Prejudice’s most roguish gentleman on the eve of his 60th birthday to lift the sheets on what exactly what happened 30 years on from where we left him.

Discover his own version of some very famous literary events: What really happened with Darcy? What did he feel about Lizzie? What happened at Waterloo? Not to mention Byron.

This on-demand version was originally streamed live from the stage of the magnificent Regency Theatre Royal Bury St. Edmunds. 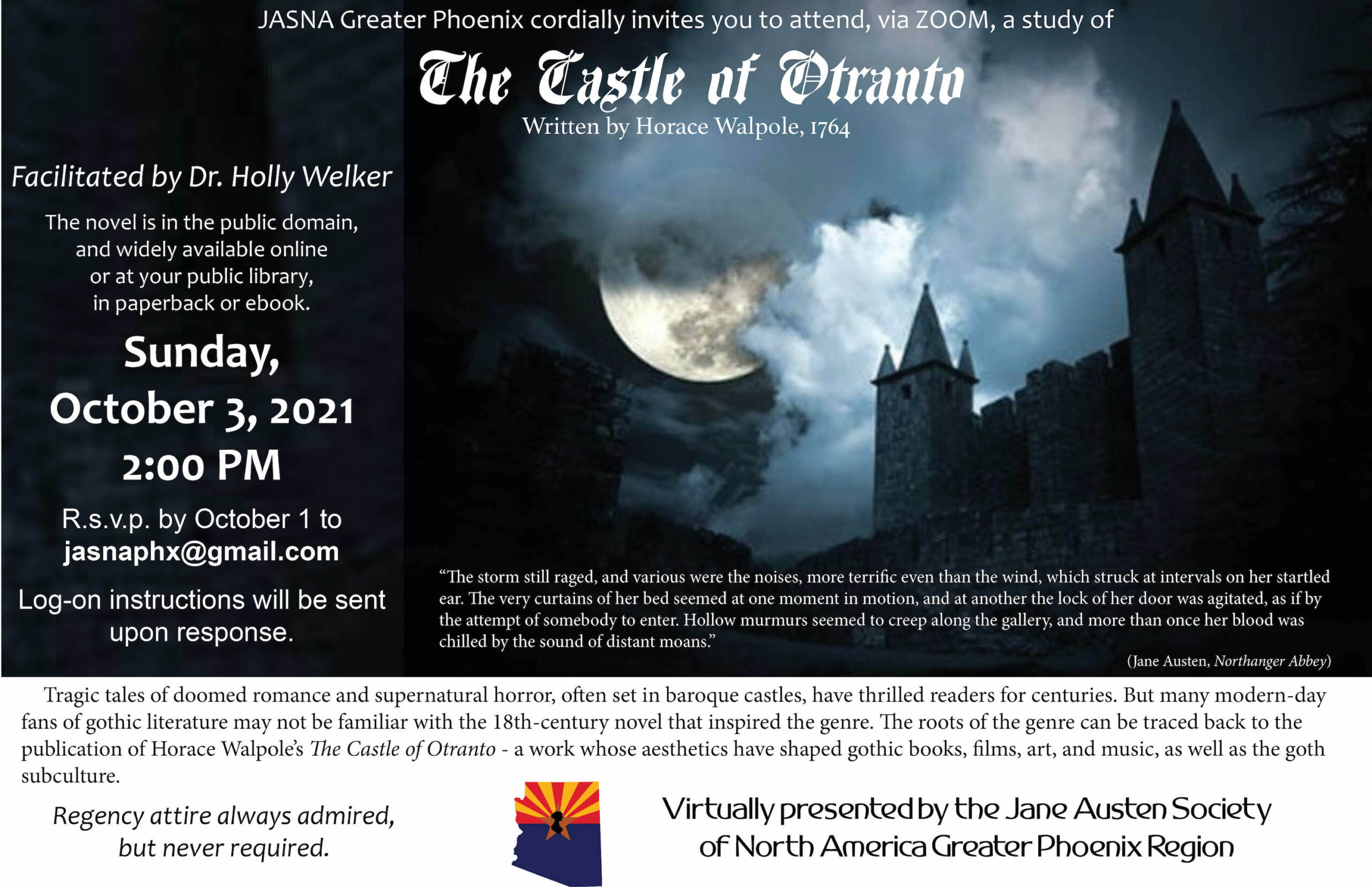 You are cordially invited to attend,

via ZOOM, a study of

THE CASTLE OF OTRANTO

The novel is in the public domain, and widely available online

or at your public library, in paperback or ebook.

R.s.v.p. by October 1 to jasnaphx@gmail.com

Log-on instructions will be sent upon response.

The storm still raged, and various were the noises, more terrific even than the wind, which struck at intervals on her startled ear. The very curtains of her bed seemed at one moment in motion, and at another the lock of her door was agitated, as if by the attempt of somebody to enter. Hollow murmurs seemed to creep along the gallery, and more than once her blood was chilled by the sound of distant moans.

Tragic tales of doomed romance and supernatural horror, often set in baroque castles, have thrilled readers for centuries. But many modern-day fans of gothic literature may not be familiar with the 18th-century novel that inspired the genre. The roots of the genre can be traced back to the publication of Horace Walpole’s The Castle of Otranto – a work whose aesthetics have shaped gothic books, films, art, and music, as well as the goth subculture.

You are invited to join 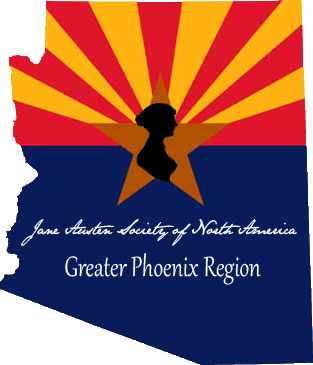 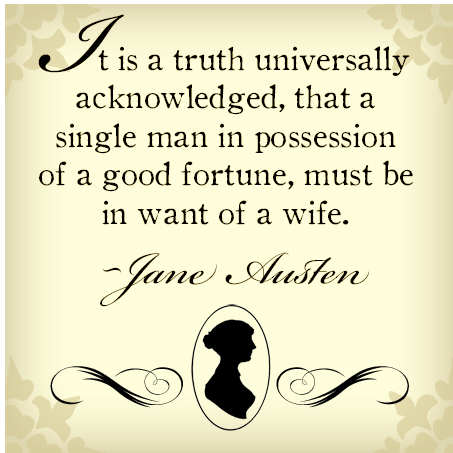